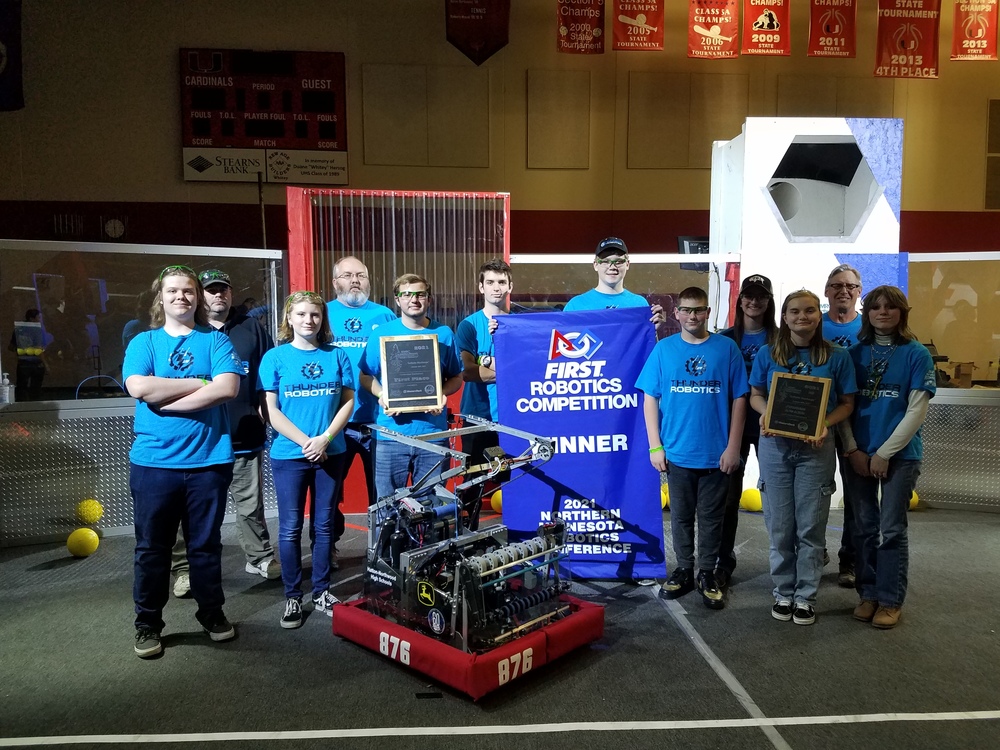 The Northern Minnesota Robotics Conference held their championship tournament on October 29th in Upsala. Thunder Robotics is a charter member of the 29 team conference. Team 876 was ranked 5th after the qualifying rounds and was picked by Pequot Falls. The Flyer Robotics teams from Little Falls was added as their third Alliance partner.

Championship play began and the Thunder defeated the 4th ranked alliance in two straight matches to move into the finals, where they faced the number three ranked Alliance led by the Pine River, Minnesota team. Team 876's alliance defeated them by again winning 2 straight matches to take home the Championship of the NMRC. Thunder Robotics also won the Judges' Award, bringing home 2 trophies and a banner.

Drive team members for the Thunder were Ethan Snyder, Elias Redding and Trevin Hins. The group did an excellent job, improving as the tourney continued. The pit and programming crew that kept the robot running well was Myelle Redding, Beau Enger and Ava Chandler. The scouting and strategy team of Angela Zaruba, Drea Rodriguez and Jett Schwehr made great choices as the Alliance they picked worked well as a unit. Mentors that helped guide the team were Ben Thorsgard, Justin Nelson and Mike Voglewede.

On October 30th, the Thunder competed in the NMRC "Open" which was open to non-conference teams and Team 876 did well, finishing 2nd in the qualifying rounds and ending up in 4th place as an Alliance. The team had 20 matches in the two days, which was a tremendous workout for the students as they haven't been in an official competition for quite awhile.

The NMRC tourney was the last official competition for "Scorpion" the robot, which will now be retired. Next up for Team 876 will be the challenge for 2022. The new game is called "Rapid React" but the details will not be made public until January 8th, at which time the robotics students will have about 6 weeks to design and build a completely new robot. Thunder Robotics will compete in the Duluth Regional on March 4-5 and the Great Northern Regional in Grand Forks on March 25-26, 2022.